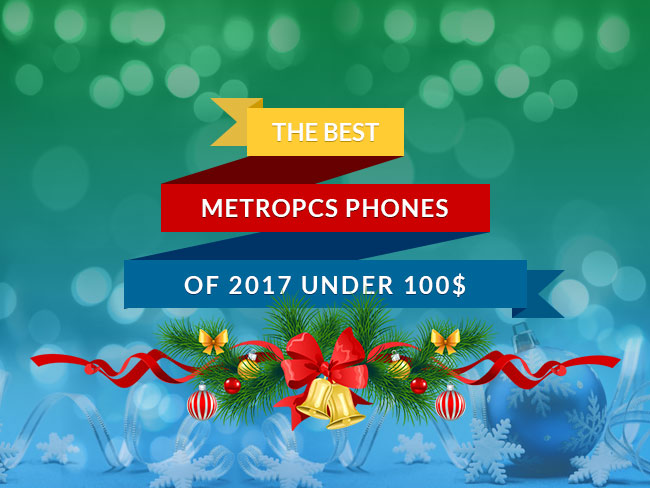 MetroPCS is the home of the best smartphone bargains. Performance-wise, you’ll never get left behind because it uses the T-Mobile Network. You get the best phone deals, for a cheaper price, with a fast network, and no lock-ins! You can even get mid-range MetroPCS smartphones for just under $100 upfront!

If you’re wondering which one’s the best deal for your needs, we have compiled 6 of the best smartphones under $100 that MetroPCS released for the beautiful year of 2017.

Specs At A Glance: 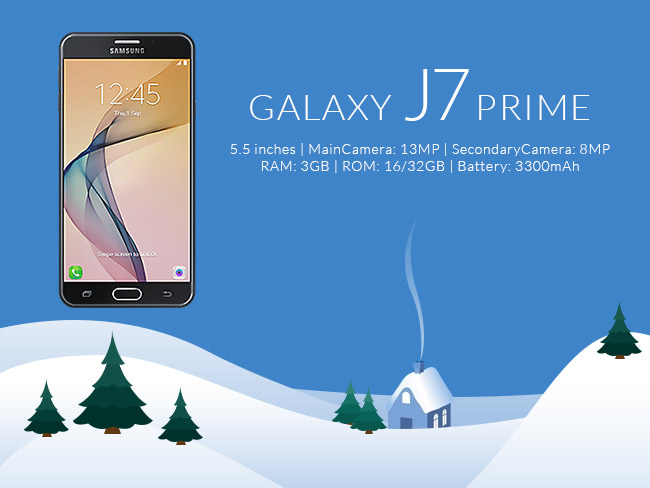 For absolutely zero upfront charge, you can get your hands on Samsung Galaxy J7 Prime. It has Samsung’s powerful OS and simple interface for a lesser price. It might not be the brand’s flagship, but it still amass phone features that naturally makes it a steal for a Samsung.

You have 8MP front camera and 13MP rear camera that lets you record in 1080p, which means that you’re getting awesome selfies and groufies on this one. It comes in two different storage sizes, 16GB or 32GB, but either way you can still expand it to a massive 256GB because it is microSD expandable.

You have 3GB RAM for all things you want to do with your phone, and that also means the fluidity of your tasks and the responsiveness of this phone under heavy usage is just like that of the iPhone X. Nope they aren’t the same in so many ways, but you can at least multitask with your Samsung Galaxy J7 Prime and not have any issues at all.

It is heavier than the Samsung S8, at 167g but they are almost of the same dimensions, except of course the height, because the Samsung S8 stands at 6.2 in tall. The phone comes in two different colors; black and gold, and feels premium to hold.

You also get a whopping 3300mAh which means you have batteries that can last you the day or even more than that. Finally, you have 3.5mm headphone jack sitting at the top, which should be the number one reason why this phone is sold out. 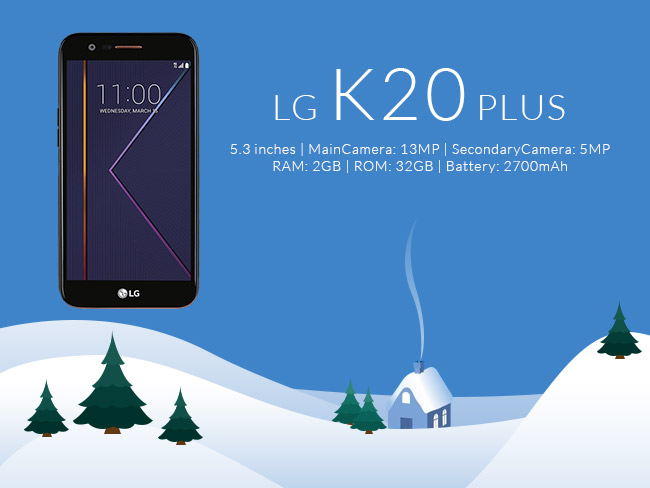 LG K20 Plus is a cool, budget phone that has good camera and reliable hardware. It isn’t as big as the other mid-range options but it fits snugly on your hands and you can obviously operate it with one hand.

If you are worrying about how your fat fingers are going to deal with the smaller screen, don’t worry because you can adjust the keyboard’s layout and height. It’s highly customizable, LG simply made it that way.

It also has fingerprint sensors, a massive storage of 32GB, and 2GB RAM. It’s microSD expandable so storing data won’t be a trouble. The front camera isn’t that bad at 5MP, but the rear camera is 13MP and can shoot 1080p. It also allows you to take your selfies with simple hand gestures. The battery isn’t as big as everyone else, but it can still last you a day depending on your usage, though.

LG K20 Plus processor is also pretty fast so you can still multitask on this phone seamlessly without lags or anything. Not impressed? Let’s get onto the next. 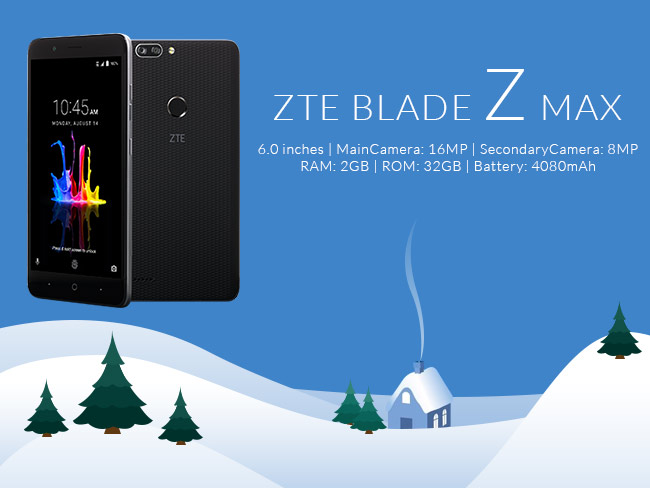 ZTE Blade Z Max boasts a dual camera, a fingerprint scanner, a 6 in display and a gargantuan battery. If you are tired of whining why expensive flagship device don’t have everything, well, now you can stop.

For only $129 (but you can buy this at MetroPCS for $99 upfront), you get all the features you’ve been looking for in a phone. You get the biggest battery which is a whopping 4800mAh! You’re not going to expect a premium build though, but this phone sure is bigger when compared to other pricey flagships like Samsung Galaxy S8.

It has a headphone jack and a USB type C charging port, and we’ll give it two extra bonus points for having them. The 32GB storage is expandable with microSD, which means you can have it up to 256GB of memory for all your lovely pictures, videos, and adventures.

The fingerprint scanner at the back is also fast and accurate and that means you are eliminating the hassle high-end phones are notorious for.

ZTE Blade Z Max also has 2GB RAM and although it runs on an underdog Snapdragon processor, it gives you no lag problems when multitasking on your phone. It’s Split Screen feature also works seamlessly. There are also shortcuts that allows you to launch major phone features, like the camera, very easily but we’re not on the best part yet.

The camera on this phone is a beast! You don’t expect to see a dual camera on a budget phone, but this one has it. Ok, this camera isn’t like what high end phones have, so don’t get your hopes up that much. However, considering you get a 16MP main camera and 8MP front camera for selfies, this is more than just your average budget phone.

It’s practically the best budget phone and it’s definitely worth it for the price. 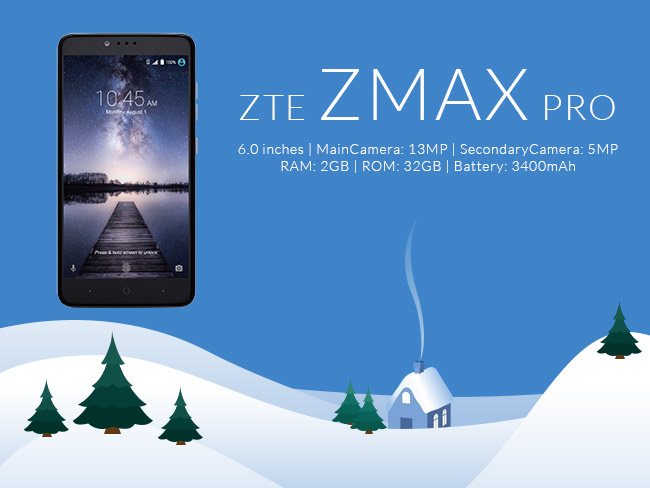 Thought ZTE has killed it with Blade Z Max? Not just yet. You’re about to meet the biggest budget phone under $100. Yes, you read that right.

For only $99, you can have a very sleek, well-designed and high-performing phone that can last you a day, give you wonderful videos and images, and do multitasking like high end flagship phones do.

It has a huge screen being 6” at that, and it has 1080p resolution which makes it all the more lovely; you wouldn’t assume it’s a budget phone on a first look. It also has 2GB RAM and 32GB internal storage, which means you can finger your tasks very easily. It also has a microSD slot so you can add more memory.

Just like its brothers in the Blade series, it has a fingerprint scanner seated at the back, which is accessible, fast, and accurate. It also has a USB type C charging port and a headphone jack (I hear you say Yehey!)

The phone isn’t the best at the camera department, but what do you expect from a budget phone? Nonetheless, you are still getting that extra level of security with the fingerprint sensor which you don’t normally see from budget phones.

If you already love MetroPCS, you’re not going to sulk over the fact that ZTE Z Max Pro is only available through them. 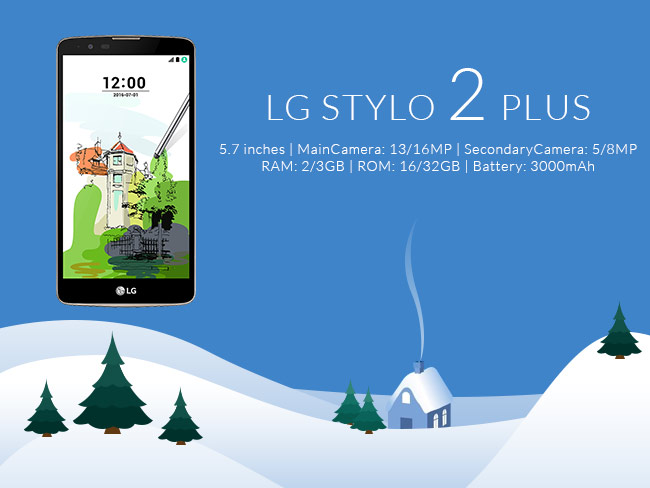 There’s probably a good reason why LG named this particular model Stylo 2 Plus and bet you know the reason why.

The LG Stylo 2 Plus isn’t the cheapest phone nor the best budget phone there is, but it flaunts an attractive feature that people always wanted the Samsung Note 8 for. Yes, you can write on the screen and instantly jot down notes without even the need to turn it on!

In addition to that you can also turn your handwriting into a calligraphy and make Quick Memos using the stylus. Bet you’ve so many things you want to do with this feature.

It also has this Pop Scanner feature that lets you trace and crop an object in an image so you can view it straight on. Aside from being able to write, you can also draw with your stylus pen.  That’s so clever!

The LG Stylo 2 Plus also has a rear fingerprint scanner which is fast and easy to reach, that also lets you confirm payments using your phone. Don’t worry about running out of battery because this one is packed with a 2900mAh battery and you wouldn’t need charging until you hit your home doorsteps.

You also can split the screen in two, so you’re not getting a headache running several apps at the same time. And since it has 2GB RAM and 16GB internal storage (expandable up to 2TB), switching back and forth to different apps would be a breeze to do.

Just like most of the budget phones, it isn’t the best in the camera department, but it does have features that you’d love to have when you’re taking selfies; like the Gesture Shot, Selfie Light, Beauty Shot and many more.

Again, it doesn’t boast awesome cameras but it’s not going to disappoint you being in the budget phone category. This one too, is only available through MetroPCS. 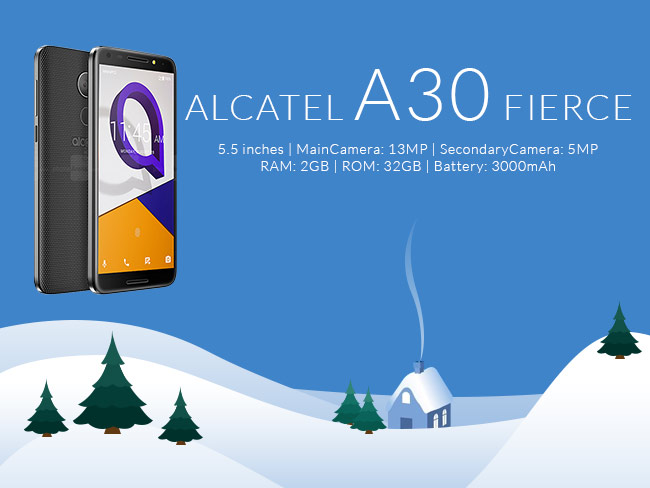 If you’re up for another $100 phone MetroPCS has got another one in store for you. Standing at 5.5 in, this budget baby will never compromise every cent you spent on it because it has a 13MP camera, 2GB of RAM, 32GB internal memory, and 3000mAh battery. You’re going to love every single bit of this phone to pieces.

It has a 3.5mm headphone jack (for all you headphone lovers out there), and it has a micro USB type of charging port. The best feature of this budget phone is the ability to save up to 5 different fingerprints for 5 different purposes; so you can launch 5 different apps easily using your fingerprint. Genius.

It’s memory is also microSD expandable up to 128GB so you can save more awesome selfies. It’s built to look like a flagship, but it’s seriously more than five times cheaper than any high end phones you see nowadays.

Just when you thought Alcatel is done with surprises, the A30 Fierce is also programmed to connect with Amazon Alexa. You can now call it a connected home for all the convenience you are going to get with a budget phone from MetroPCS.

With this phone, you can do everything with convenience!

There you go folks, that the best of 2017. Ain’t this list so 2017, though? Anyway, if you’re running out of money but still dream of getting the best deals, you can head on to MetroPCS and get this phones for the price you can afford. You’re not going to be trapped in a 2-year contract and if you ever need SIM Unlocking Services, you got the best guy around – UnlockBase.

We unlock your phones from MetroPCS and no doubt, you’ll love it all the more. Just hit us a message and we’d be ready to entertain them anytime of the day for yah!

The Best Gadgets To Gift Yourselves With This Christmas of 2017 (with Price) No More Unlocking Fee! CRTC Enables Phone Unlocking Free of Charge
ACCEPTED PAYMENT METHODS