In September this year, when Apple unveiled the latest iPhones, Tim Cook introduced Artificial Intelligence (AI) as a game-changing roadmap component behind almost every aspect of the device. Apple manufacture 15.6% of the world’s phones, but capture more than half of the industry’s revenue. Their strategic focus on AI is a worthwhile reminder of the importance of the opportunity that AI represents.

It’s not just Apple, however, who stand to benefit from this new, ubiquitous technology. With AI continuing to be the technology offering the most potential of our time, and mobile now a key part of every digital customer interface, there is no industry which can expect to be free from the need to find a way to garner AI’s benefits. 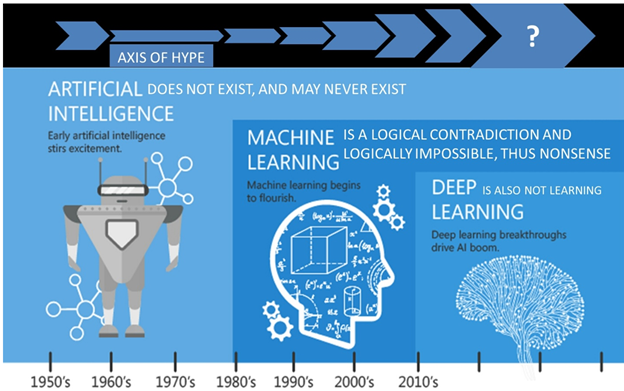 AI as a concept has been around since the idea was first generated by John McCarthy in the late 1950s. Today, well beyond claims of ‘hype’ it is fundamentally redefining every industry, starting with mobile.  Source: Medium

It’s no exaggeration to suggest that AI in Smartphones will redefine the field of mobile technology.

According to Gartner, 80% of Smartphones will have AI capabilities by 2022. AI is paving new ways to meet both specified an unspecified customer expectation and turbo charge the use of mobile technology in research.

AI’s success is derived, most fundamentally, from 3 things.

The internet of things (IoT) is the name given to the concept of cheap sensors and computing capabilities being embedded in to everyday aspects of our lives – everything from smartwatches, to smart buildings, rubbish bins and even children’s backpacks. Information from those now connected products is delivered through mobile phone (cellular) networks connected to the internet with increasingly cheap data plans.

In some senses, the Internet of Things is just at its beginning. Forbes suggest that 45% of business are aiming to implement IoT sensors in the machinery in their organizations. This is the first tranche of the rollout – since these sort of industrial implementations offer the fastest payback for an IoT investment.

We take it for granted that our desktops and selves are connected to the internet with laptops and smartphones respectively. Over the next decade, every other physical asset worth more than $50 will also be added to the mix. Just like our computers and phones, these artifacts will start to generate huge quantities of information about their status and environments. 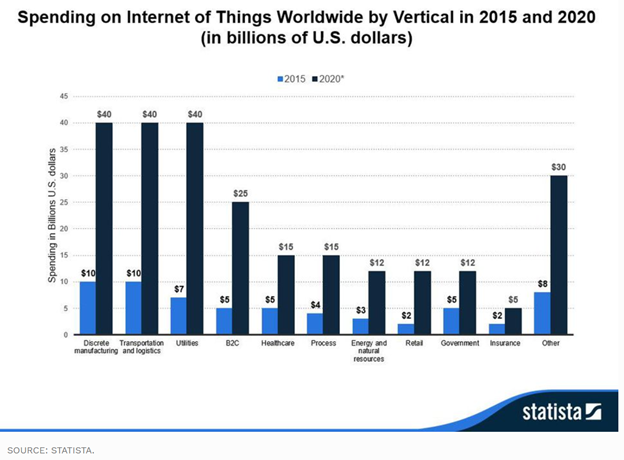 Early implementation of IoT will affect industry, where paybacks are fastest. However, B2C – Business to Consumer applications will also occur in the next decade. Source: Statista

In this IoT world, AI assists in picking the signal from the noise of data which are generated by newly connected devices. Combined, of AI and the IoT helps means that the information obtained from such a broad array of sensors, can be filtered and put to good use.

The results will improve efficiency where, currently, we don’t have information to realize how we could optimize.

We take for granted that our current interface with mobile technology is the common touchscreen, introduced most famously, again, in the original iPhone back in 2007. This may not be the case for much longer, however, and AI is, again, the tool which is bringing these new interaction methodologies to the fore.

Now, people are getting used to ‘talking’ (or having real time Instant Messaging ‘chats’) with chatbots which answer their queries in much the same way a human would.

Most people have interfaced with one type of ‘bot’ even now. If you’ve talked to Siri or said ‘OK Google’ to perform a search with your voice – you’ve been dealing with a ‘personal assistant’ – a specific type of Chatbot.

Now, the same technology is being rolled out by banks, phone companies and even government departments to manage the huge volume of calls and chat requests they receive from people every day.

The beauty of chatbot is the ability to communicate with a large number of people at the same time – importantly – at a zero marginal cost. Over time, these bots are much, much cheaper than employing people to do the same thing.

Chatbots have started to become a crucial aspect of customer relationship management, learning from mistakes, providing more accurate answers to the most common questions and getting better at the root of the problem from a computing / AI perspective – establishing a user’s intent from what they say ( ‘utterances’ in techno-speak.)

Does using chatbots work? More than 95% smartphone users feel that customer service has seen improvement since the inception of AI fueled chatbots.

AI and mobile technology – A lethal weapon for research

AI-powered tech may well be the key component driving the future of every form of mobile research.

80% of research is spent compiling and analyzing the information required. A great deal of the most useful research undertaken starts with a deep understanding of human needs and behaviors. The data available from mobile devices, aligned with AI to sort the wheat from the chaff, has now made that information easier to collate.

Consider the amount of information a smartphones gathers. Simply studying people’s movements using the GPS feature on a phone can be useful for research purpose. Other device sensors (most phones contain accelerometers, GPS, microphones, RF antennae and so on) can be used to gather information on people and cross reference that with other variables, either established through the phone data or derived from another source, to reach a research objective.

One specific, work undertaken at Dartmouth University, used data collected from students’ smartphones, to determine their levels of depression, stress and loneliness. Their movements, audio signals and position information were correlated with survey questions asked directly of the students using one of those targeted apps. The results could be used to predict psychological wellbeing on other students phones (those who had not answered the questionnaire.)

Further, the strict mathematical models behind AI can also be used to practically remove human bias from the research process, something hard for humans to do but which can materially and negatively impact the value of any research undertaken.

AI and smartphone security – Two sides of the same coin

Finally, AI is catering to the biggest concern of the mobile economy – security.

Security is a difficult subject to contend with for those developing any consumer product, especially when it’s used to address the needs of mobile users.

The nature of security solutions is that they offer an uncomfortable trade off – between the safety of and the convenience of access to information. It’s an important balance to get right, given the quantity of personal information that the average smartphone now contains.

AI ‘fuzzy’ pattern matching is allowing developers can predict vulnerability levels and app security. The technology will keep a eye on ‘suspicious’ (note how vague that term is) activities, identifying them from the coalescence of similar patterns in the past – and raise an alert when ‘unusual’ behavior (of the sort which might indicate a ‘hacker’ is working) is encountered.

AI has the potential to find the loopholes and reduce the risk of intruders attacking the smartphone of the customer through their apps.

Bringing it all together

Most fundamentally, AI helps computers behave in a more human manner, delivering more personalized experiences in an automated way. When your phone recommends a song playlist you love, containing tunes you’ve never heard before, when your mobile interface to Netflix guesses a show you’ll enjoy or when Amazon show you products that you might like to consider – AI is behind those suggestions and transforming the experience you have with your mobile technology.

Artificial intelligence is slowly revamping the entire economy, including its mobile component with its immense power to connect the facilities we’ve listed above. The IoT means more data is collected, often in real time for analysis. AI makes collecting and analyzing it more secure. It offers better ways of interfacing with technology than our current screen technology, in the form of chatbots and voice agents ‘why’ act on our behalf.

All products, and company names, logos, and service marks (collectively the "Trademarks") displayed are registered® and/or unregistered trademarks™ of their respective owners. The authors of this web site are not sponsored by or affiliated with any of the third-party trade mark or third-party registered trade mark owners, and make no representations about them, their owners, their products or services.
ACCEPTED PAYMENT METHODS