After the release of Xperia XA2 and Xperia XA2 Ultra, Sony released another phone for the mid-range market, the Xperia XA2 Plus.

Just like many of Sony’s flagship phones, the Xperia XA2 Plus is designed for entertainment. It has a huge screen, a conventional design, and a huge battery capacity. It is built with a 6 inches aluminum and glass body, and had two different sets of memory capacity and RAM; 32GB with 4GB RAM and 64GH with 6GB RAM. You can get in 4 different colors; silver, black, gold, and green.

What makes this phone stand out in the upper midrange arena is its 23MP rear camera. If you’re greatly inclined to photography and filmmaking, you definitely need to check this phone out.

This high- level tiered phone is crafted with Corning Gorilla Glass 5 with metallic finishing. The edges are done with diamond cuts bringing an elegant curve that is ergonomic to your hands.

Its total height is 6.2 inches, but only 6 inches of it was spent to the 1080 x 2160 resolution full HD display screen. It’s not bezel-less and it a small chin at the top and at the bottom of the screen.

Thus, although the bezel is thinner than Xperia AX2 and Xperia Ultra, it can never be compared with other Android phones that already achieved the bezel-less look e.i. iPhone XS, iPhone XS Max, and iPhone Xr.

Located at the top of this phone is the audio port for 3.5 mm headphones that enhance by DSEE and High- Resolution Audio technology. In addition, the LDAC that heightened the wireless music streaming is available on this phone too.

Sim and micro-SD slots are located at the upper left side of the phone. Located at the other side are the camera key, power button, and the volume adjuster.

The battery capacity of this phone is in 3580 mAh, however, the processor of this phone is still in Qualcomm Snapdragon 630. The performance is expected to be slower than Xperia XZ2 and shorter battery life.

Nonetheless, it’s one of the few mid-range phones that have a huge battery and the operating system is justified by its price.

It doesn’t have dual rear cameras but having a 23MP single rear camera compensates what it lacks. You won’t see this from mid-range phones coming from other manufacturers.

Even the Samsung Galaxy Note 9 only has a 12MP rear camera at the back, and it’s a flagship at that.

Having an 8MP front camera is not that bad, too. You still have a bokeh effect and other common camera features other phones of the same price range have.

The security feature of this phone is fingerprint scanning. It is located at the back along with the camera.

The touch system of the pre-installed keyboard to this phone is very smooth and there’s no delay. Other phones may pause if you’re typing too fast; there are none in this phone. 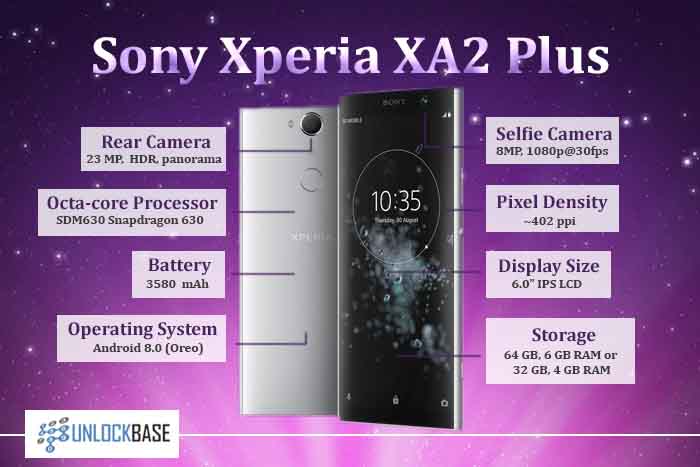 The purpose of this table is to show the improvement (if there is) in Sony’s Xperia XA2 Plus.

Sony’s XA2 series offered mid-ranger phones that really stand out in performing their daily tasks in serving you.

XA2 Plus is the upgraded version of the regular XA2. It has bigger RAM and internal memory more than its predecessor and the capacity to accommodate external memory has enlarged too.

On the flip side, after the release of XA2, XA2 Ultra is launched having the same specs with XA2 except for its front camera having the amount of mp twice as compared to XA2 and XA2 Plus.

Despite that, the XA2 Plus has a bigger RAM capacity. If you’re looking for speed, this is your best bet.

The Xperia XA2 Ultra is priced almost the same as the Xperia XA2 Plus, the latter doesn’t have lesser specs, it’s just a matter of deciding what you are able to compromise.

You really can’t have it all.