The Sony Xperia XZ3 is the last flagship phone in the XZ series released this year.

Unlike its predecessors, this flagship phone comes with an impressively bigger 6in screen display. What makes this phone a beast is that it’s the first ever Sony Xperia phone to have an HDR OLED display, making images as crisp as watching them in a Sony Bravia TV.

Sony Xperia XZ3 at a glance

The phone looks like your typical 2018 Samsung; its screen had the iconic curves at the edge. Unlike most Android phones this year, this one thankfully doesn’t have a notch.

A notch would have ruined its beautiful display.

Going by the book, the Sony Xperia XZ3 came out with the latest Android operating system, customized into the Sony graphic user interface. It is powered by Qualcomm Snapdragon 845 with 64 GB internal memory supported by 4 GB RAM.

It has a 19MP rear camera with a motion eye technology that can also record in 4K HDR. At the front, there is a 13.2MP camera, which we think is a total letdown, since it can do so much better for selfies. 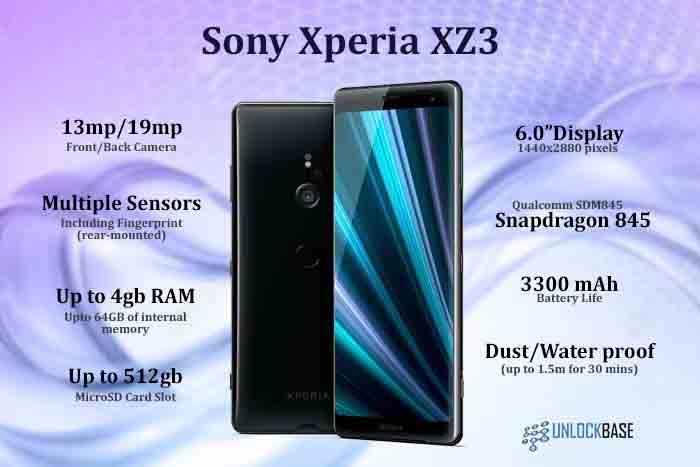 In its borderless slim appearance, Xperia XZ3 came in with four different color variations you can choose from; Black, White Silver, Forest Green, and Bordeaux Red.

Both the Samsung Galaxy Note 9 and the Sony Xperia XZ3 have aluminum frames and curved glass panels in the front and back. Both are also IP68 water and dust resistant. As mentioned earlier, the Xperia XZ3 has a cunning resemblance to Samsung Galaxy phones.

The XZ3 stands 6.2 inches with bezels at the top and bottom leaving 6 inches for the screen display, but Note 9 is still a bit taller. But the XZ3’s size is more ergonomic to hold than that of Note 9, which are too large to hold.

And since the XZ3’s screen is HDR OLED, it’s arguably better than Note 9, which has Super AMOLED. It has a slightly bigger pixel density, which means it has high contrast ratios and deep blacks.

However, Note 9 has a bigger display and slightly smaller bezels than that of the XZ3.

Motion eye system is still in-use and the predictive capture in this phone that gives you the opportunity to capture 4 photos before clicking the capture button has been showcased to its predecessors already.

Just like the Note 9, the XZ3 has slow-motion recording, but the latter has higher resolution. The XZ3 can record in 1080p at 960fps while the Note 9 can record 720p at 960fps. However, recording on Note 9 is way easier because it has motion detection.

The processor of this smartphone is the Snapdragon 845. Having a faster processor means conserving energy since it cannot take so much time in optimizing a command.

Nonetheless, the XZ3 is compatible with wireless charging and comes out of the box with Android Pie, the latest Android operating system.

The biometrics of this phone is still in fingerprints. We are still waiting if Sony has a plan to follow Apple through their Face ID, Samsung’s Iris Scanner or they’ll be able to develop a much safer and convenient way to secure phones in the near future.

Sony Xperia XZ3’s display is definitely way ahead than that of Samsung Galaxy’s Note 9. It’s arguably better than Note 9 in so many aspects, and we think that with the Xperia XZ3, this is Sony’s golden year for smartphones.