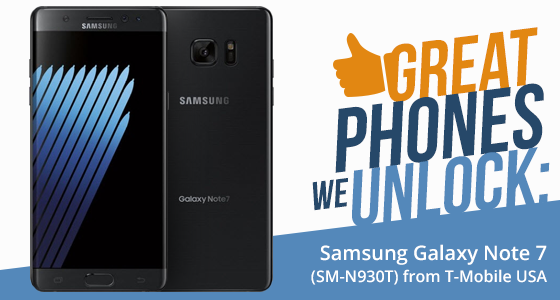 Samsung has skipped Samsung Galaxy Note 6 and gone straight to Galaxy Note 7. It’s described as their kitchen sink phone, as contained within its sleek casing is it comes with everything you could possibly need. It comes with a cool almost bezel-less wraparound 5.7” QHD super screen made of scratchproof Corning Gorilla Glass, and strikes a balance between work and play, enabling users to achieve more than what they thought possible on a smartphone. The phone comes with 64GB of internal memory upgradeable to 256GB.

Key attributes of the Galaxy Note 7

Not surprisingly, armed with its handsome new looks, superior functionality and security, it is Samsung’s most expensive phone retailing through T-Mobile at $849.99 if you were to walk in and buy it off the shelf. But if you were to go on contract it can be yours for just $69.99 upfront and $32.50 a month for 24 months. In addition to the phone T-Mobile also tempt you with the choice of a full year of Netflix, a Samsung Gear Fit2, or a 256GB memory card.

The Galaxy Note 7 is Samsung’s top of the line phone, so it makes sense to find the best phone deal to enjoy it. UnlockBase is the web’s leading remote unlock service with the largest database of phones and service providers from around the world.