Among the common phone unlock errors is the “Invalid MMI Code Error”. This error happens rarely on other phone brands except the Samsung Galaxy series that are dual sim, or phones that can cater two different sim cards from two different networks at the same time.

Before we hop onto the troubleshooting, let’s briefly go through the technical aspect of MMI codes.

What Are MMI Codes?

MMI codes or Man-Machine Codes, are special codes you dial on your phone to communicate with your phone,  SIM, or with your service provider’s network operator computers. By dialing MMI codes on your phone you will be able to obtain valuable data or change phone/ sim settings you can’t access through the phone’s user interface.

MMI codes usually contain special characters such as the asterisk * and the # hash.

Among the most common MMI codes used to communicate with your phone is  *#06#, and it is the code to get your phone’s IMEI/Serial number.

Another set of MMI codes are USSD codes. They are also known as Quick Codes or Feature Codes, and they are used in GSM cellular telephones to communicate with their mobile network operators. You often use USSD codes to check your prepaid card balance.

How do MMI Codes work?

When you dial the MMI code in your phone, it is processed by your phone’s MMI reader, and if or when it does not recognize the code, it is then sent to the network verbatim.

Say for example, you have sent the code *09876*54321# your phone’s MMI parser will send the “command” to the phone, and if it doesn’t recognize the code as an internal command, it will then send it to your network operator verbatim.

Your network has a specific list of MMI codes they use on their own so if it returns with a “Connection Problem or invalid MMI code” message, it means that the MMI code you have used is not recognized or your phone failed to connect to your network.

How To Resolve MMI Code Error

Fixing an MMI code error is fairly easy and in order to resolve the issue, we need to isolate the probable causes. To do this, we need to examine the path that the MMI code goes to before it reaches your network.

If you are getting an invalid MMI code error, there are only three possibilities.

(1) You have poor signal or not getting network connection.

(2) You have dialed the wrong MMI code.

(3) Your MMI code was sent to the wrong network. (Dual-sim phones)

Note: Do not mistake the MMI Code to be the same code UnlockBase has sent you. UnlockBase only sends Sim Unlock Codes and do not personally have your MMI code information. You can get the correct MMI code from your current service provider (see sim card information). 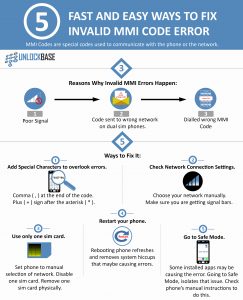 1. Check the code you are using. Add additional special characters.

You can try adding a comma ( , )at the end of the code before you send it. The comma, as an additional character will tell your phone to overlook other errors on the phone and send it to the network.

If the comma doesn’t work, you can insert + after the asterisk and before the first digit. However, this code only works when the first character when your code starts with an asterisk *. For example:

The plus ( + ) sign will tell your phone to force process the execution and overlook other phone errors that may be in the way.

Another reason why your phone sends you an MMI error is the lack of network connection. If the MMI code you are sending is a code to check your prepaid balance, or anything that is specifically a function of your network operator, you need to make sure that your phone is connected to your network.

If you are otherwise not getting any signal bars, your phone is probably not yet connected to your network and you have to reconnect to it manually. Most of the time it connects automatically but there are also times when you have to manually select your service provider in order to connect to their network.

Here’s how you do it:

This is the usual process for most Android devices with stock Android ROM and user interface. You know your phone is already connected to your mobile network when you are getting signal bars that shows 4G, LTE, 3G, etc. You can try dialling the MMI code again.

3. Disable or use only one sim card.

If you are using two sim cards and your calls, text, or data automatically route to one specific network on your phone without asking you to manually choose network, there’s a possibility that your phone is sending the MMI code to the wrong network.

In order to isolate the issue you have three possible options; (1)  set your phone to prompt for manual selection of network, (2) disable one of the sim cards, and (3) remove the other sim card physically.

You have to set your phone to prompt for manual mobile network selection to “Always ask” before making a call. You can do this by going into Settings > Sim Settings /Dual Sim Settings >  Voice/Call > Always Ask.

Restarting your phone refreshes it from its most recent operations. Sometimes errors on the phone are just a product of simple system hiccups that can be solved only through a restart, so it’s advisable your restart your phone when all the other steps have been taken. Most of the time simply restarting your phone resolves the issue.

There are also cases when the phone’s MMI code error is caused by an app or a specific software installed the phone. Many users have been able to resolve the MMI code error by removing certain apps on their phone that’s hindering the code to go through the network operator.

When you reboot into Safe Mode, your phone will not load any third-party apps and only the stock apps that came with the original OS will be available. Furthermore, this means that all the apps you have downloaded will not be available in Safe mode, and this will help you determine whether any of the apps you have manually downloaded and installed are causing the MMI code error.

Going to Safe Mode is the second to the last resort, if only all the before mentioned possible resolutions have been attempted many times. It is fairly easy to do and your phone will go back to its normal state once you reboot it again.

Here’s how to enter into Safe Mode:

Once you are in Safe Mode, try entering the MMI code again and see if you are seeing the same error. If you are able to go through this time, then it means one of the apps you downloaded in your phone is causing the problem.

MMI code errors are easy to fix and if you think you are lost or are needing help with this problem, don’t hesitate to talk to us. We are a global enterprise with 24/7 support and we are ready to help you anytime!

Did we miss anything here? Did you experience this error in the past? How did you solve it? Drop it in the comments!