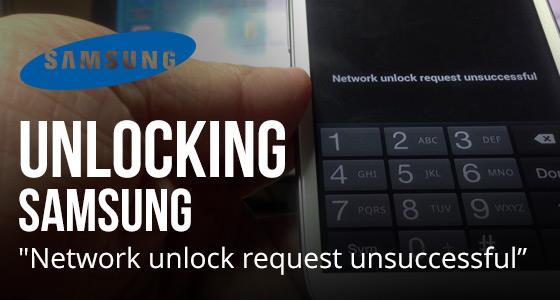 When you insert a SIM card from a different cellphone operator than the original, your Samsung phone asks for an unlock code and prompts you to enter the “Network blocking control key” or “SIM Network Unlock PIN“. So at this point you decide to go online and receive a cellphone unlock code.

If upon entering your unlock code you receive a message such as:

– “Failed to unlock network”,
– or “Failed to request“,
– or “Your attempt failed“,
– or “Unlock Code Request Unsuccessful“

There are three possible scenarios:

You (or the previous owner) entered too many wrong codes, it’s what we call in our industry “Phone Freeze”. (if so, see the solutions below).

Non-original ROM. You (or the previous owner) may have installed or flashed your Samsung with a Custom ROM that is not genuine (like Avatar, or Cyanogen MOD to name two), therefore the code provided will not work (if so, see the solutions below).

The code is actually wrong. Yes, we do not claim to be perfect, sometimes the computerized processing of orders produces the wrong code or, very rarely, even Samsung or the cellphone operator has supplied a false code base.

Well the last scenario is even worse than the previous one. Since summer 2015 two networks (MetroPCS and T-Mobile in USA) started to release Samsung cell phone coming with an app install by default called “Device Unlock App”. Those are simply not asking for code, and even if you use some secret code to make those ask for a code, they will simply not work. Do not order code if your phone is one of those since the code you will receive will be simply useless.

The message “Network unlock failure” or “Phone Freeze” means that someone has already tried to unlock the phone with a bad code, and the number of attempts has exceeded the allocated number of times permitted, (it’s usually a maximum of 3 trials tries for a wrong code). In this case it is very likely that if you bought a used phone, the previous owner attempted to unlock it out with a bad code by visiting an untrustworthy free unlock website.

At UnlockBase, our codes are 100% correct since they come directly from the Samsung factory.

If you choose a manufacturer code, you receive two codes:

The purpose is to “unfreeze” the phone with the code and thereby unlock the phone from the NETWORK.

Depending on your model, several methods exist to unfreeze with the MCK code your Samsung:

Turn off your phone, take out the SIM card and then replace it with a non-compatible SIM card
(if the phone application demands it, type the PIN number of the SIM card).

When the message “Phone Freeze” appears, call for the unfreeze code and confirm with the button “call” or “#” or “OK” (Note: be careful when entering this code, nothing will appear on your mobile screen, this is normal, you must enter this code blind.)

Again, insert a non-compatible SIM card into your phone (if the phone application demands it type the PIN number of the SIM card). When the message “Phone Freeze” appears, enter the code: #7465625*638*UNFREEZECODE# (and replace UNFREEZECODE by the MCK Code we provide.)

Insert a non-compatible SIM card into your phone,
(If the phone application demands it, type the PIN number of the SIM card)
Emergency call only: Press CALL button and enter the unfreeze (MCK Code) directly,
The phone will ask you the code for the network, enter the NETWORK code that was supplied.

Insert a non-compatible SIM card into your phone, and turn on the phone,
(If the phone application demands it, type the PIN number of the SIM card)
The phone is blocked, Click Call and enter the following code *7465625*638*CODE#
(where CODE is the unlock code of the operator)

The phone does not accept the code and returns the error:
‘Phone Freeze. SIM not available. Please contact your operator‘

Note that there is no trial “tries” limit to enter the unfreeze code, so do not hesitate to keep trying to enter the correct code and then get the ‘unfreeze’ sign with the display inviting you to enter the NETWORK code.

To received the UNFREEZE CODE, make sure you order “FACTORY CODE”

If you choose the operator solution, which is the cheapest solution, you will receive only the unlock code (NCK Code). For the network code + unfreeze code, choose the option ‘factory code’. It’s usually more expensive but it’s also much more reliable and faster.

As stated earlier, if you flashed your Samsung with a non-original ROM, it is almost certain that the code will not be accepted. In this case you will need to find the original firmware  and use Odin to re-flash the firmware with an original Android version, and if possible one that corresponds to the distribution of the original operator. If in spite of all this, your phone does not accept the unlock code, we can provide you with software to unlock your Samsung, provided that the model is compatible (90% of the models to date are supported).

All UnlockBase customers are offered this method after having tried everything else and still fail to enter the provided code. This requires a Windows PC, USB cable and some studying of our tutorial but at UnlockBase we never give up so easily!

Would you dare to jailbreak your Apple iOS 9 device? 3 ways to obtain an unlocked cell phone
ACCEPTED PAYMENT METHODS